by The Trip Takers 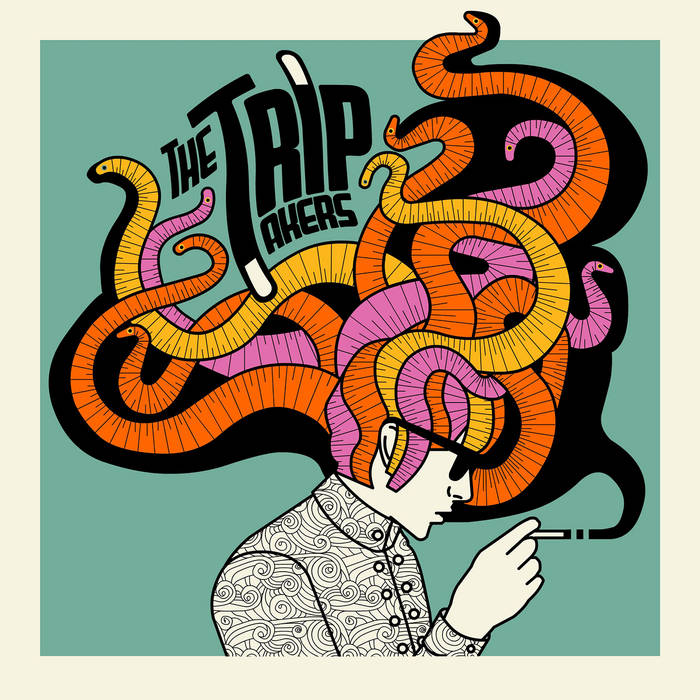 BIOGRAPHY
“The Trip Takers” project started in September 2015 after the meeting between Carmelo Gazzè and Manuel Rotella.
The first one, multi-instrumentalist with beat garage training formation and a massive list of collaborations behind (Convulsed in primis), veteran from the long-standing experience with the Out Key Hole band and with strong intent on continuing the interrupted path of Anglo-Californian’s atmospheres; the second one, young beatnik not so much attracted to the new musical trends belonging to his generation and thus on the constant research for fertile soils of the past. The band is completed by Giuseppe Mangano, with a recent past with the Out Key Hole too, and later particularly active in alternative multiform projects. Morgan Maugeri, already the Demomode guitarist, interested in testing parallel sound dimensions; Simone Di Blasi (active in Brothel) who, by joining the band at the organ, completes the formation. This creature is molded by personalities and influences at times heterogeneous to each other, which are well mixed with the common will to get out, from the current canonic sound, in an attempt to romantically preserve a retro style approach, purposely in a simple and genuine way.
In August 2016, the recordings of the first homonym EP so called “The Trip Takers”.
“The Trip Takers” project starts from the bases left in the mid-60s by bands such as Beatles and Byrds, to incorporate psychedelic atmospheres that expand the sound, making it addictive, thanks to organ and sitar on the front line. The instrumentation used and a recording technique deliberately far from the digital, but more inclined to the effects produced by the analogic, give a birth to a disc that, even if fresh and immediate, it’s far from contemporary productions to create incredibly authentic vintage atmospheres.

After first record of The Trip Takers Ep, band starts for first promotional Tour in Italy and Germany. Now they’re going to do their second European Tour in UK, France, Germany and Denmark.

THE TRIP TAKERS – Jumper Blues / Another One (Area Pirata)

We have the new Trip Takers’ work in our hands. Small and round. A black vinyl inside a flashy cover. On each side, there are two and a half centimetres of grooves from which a spring of crystalline sixties waters flows.
Moreover, they are from the Peloritani Mountains, who would have bet on it!

Jumper Blues and Another One continue in the likely, masterly recovery of the folk-punk that had already characterized the tracks of their splendid debut last year.
Harmonica, a bit of fuzz, Vox organ and faultless vocal harmonies, all aimed at recreating an almost perfect time bubble in which the silhouettes of Five Canadians, Knickerbockers, Marauders or Little Boy Blues seem to reverberate. The Trip Takers shake it with cynical self-confidence that blasts open a magical and stormy sixties world.

The music of this Sicilian quintet has a primordial essence that the band profess to be proud of channelling. They skilfully protect it from modern age influences, which could jeopardise their music. Instead, the music finds itself a place amidst the enchanted and remote beauties of the vintage universe.

A parallel and armoured world where, avoiding the clash with everyday life and its gray-poison, colourful dreams predominate and leave their decisive yet deceptive imprint.

The Trip Takers have created a present day sensation that in times past occurred in bands like Optic Nerve, Offhooks or Backdoor Men.

So be generous, buy and enjoy it!